Two years ago, my wife and I were on our phones sifting through different churches in the Hampton Roads area of Virginia looking for a new church home. We found a video clip on Instagram of a minister named Pastor Edwin Jones at The Bridge Church. We listened to the one minute clip that was posted and were impressed with the polished presentation and the quality of the solid information that was being delivered. The church happened to be right around the corner from our house. So we got dressed, grabbed our boys and went to church. We have been at The Bridge Church almost every week since that first Sunday two years ago.

My wife and I finding the church through social media may have been a foreshadowing of what was to come. It was apparent soon after we arrived at The Bridge that the church was lacking in the tools and resources that more established church media departments have readily available. My background is in television production. I have worked in local television news since the mid 90s as an associate producer, videographer and editor. I currently work as a producer for NASA at the Langley Research Center in Hampton, VA. I also offer video production services through my own company. So, I joined the creative ministry to lead the church media team.

I knew from the start that I would be able to contribute to the creative ministry in a substantial way. My goal in the leadership role is to put out quality video production that will capture viewers the same way I was captured while viewing clips on Instagram. To try to reach that goal, we had to overcome a few obstacles. 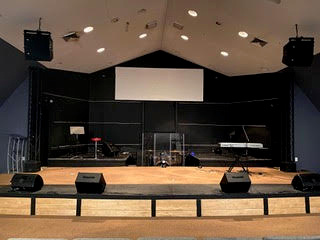 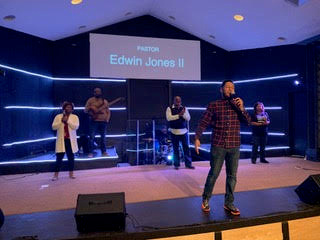 Here is a look at our sanctuary pre COVID-19 quarantine period.

The creative team volunteers were shooting the service with 2 different canon T model cameras. They were inexpensive crop sensor cameras that didn't produce the best image since the worship space had low lighting. The cameras also had the 30-minute time limit that was standard issue with DSLR and mirrorless cameras at the time. The team had to cut to the 2nd camera at 30 minutes so that the primary camera could be stopped and started again to record the sermon for that day.

We also started with just a small audio board and audio for services was being recorded separate from video on an H4N zoom recorder. 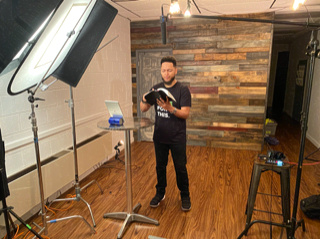 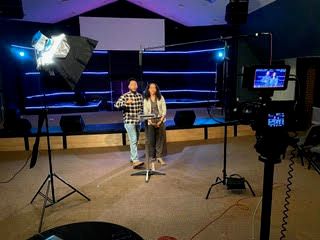 Our first weeks of shooting exclusively online, we moved to a more intimate setting in the back of the church where there is a shiplap wall that gave some texture and an at home feel to the video. Beginning Easter weekend, we moved back into the sanctuary but didn't use the stage. Instead, we opted for the floor in front of the stage and I added in some light from both the sanctuary and a soft box I set up just off camera to give the pastor some good key lighting. 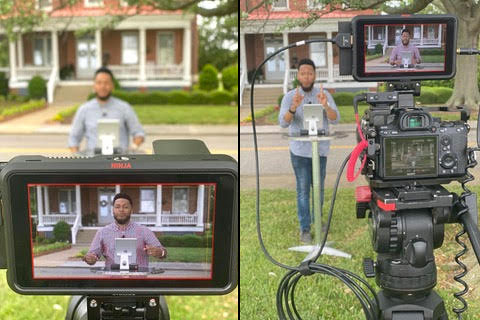 We even stepped out of the sanctuary to shoot on location in our city near the water.

Quality video production for churches has become a necessity for ministries to stay connected to their members and continue to spread the gospel during times when meeting in person is not an option. Setting up a church media department and streaming live church services, however, can be a daunting task, especially when the need is as urgent as it was when many churches had to close their doors during quarantine for COVID-19 in March of 2020.

Fortunately, I have had two years to help make improvements with the creative team at The Bridge Church. Today, we are using the following production tools that allow us to stream services online: 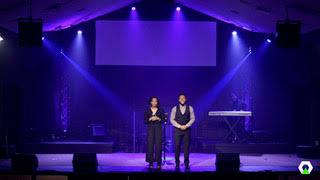 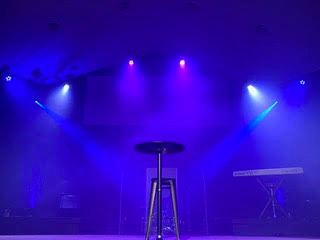 We stayed on the floor in the sanctuary well into the summer before we got new lights installed on the stage. We were set to get back on the stage to film because our light was more than adequate to create good images for an online stream.